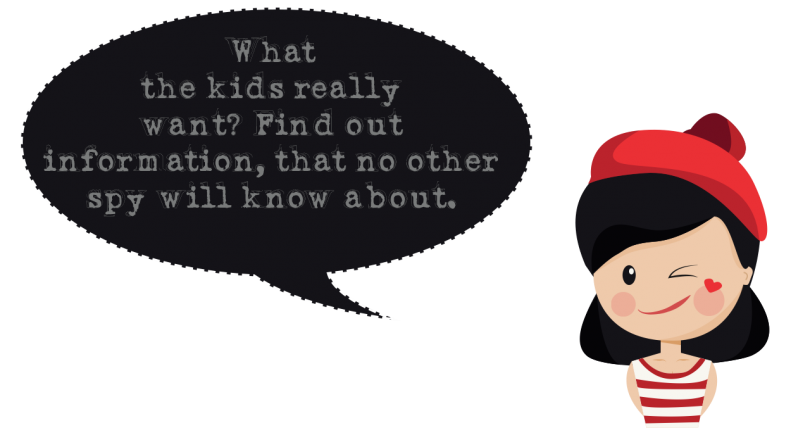 I am the SPY specialized for Kids. My mission is to find out what children really want as a gift, what books they like, what movies they want to watch, what furniture they would like in their room. And this is my website This is my site where you can find good tips about how to inspire children and make them happy.

Below is the story of how it all started – inspired by Spy Kids’ adventures. Here you will be able to find lots of information about the Spy films, watch the official movie trailers, find out more about the plot, the cast, and also facts you won’t find elsewhere. Watch with your family, your brother or sister or with your friends. All 4 Spy Kids movies that have been released will take you on an exciting adventure featuring lots of cool gadgets and engaging storylines.

Here are some quick links for spy kids:

Did you know?
Robert Rodriguez directed wrote and produced all 4 films.

Devlin, the head of the OSS played by George Clooney was wearing his pajama pants when the scene was taken. Robert Rodriguez turned up at Clooney’s house and asked him to be in the 1st Spy Kids movie. This is why you only see Devlin from the waist up!

In Spy Kids 2, Carmen picks up a gold figurine. This is, in fact, the Chachapoyan Fertility Idol that was also used in Indiana Jones – Raiders of the Lost Ark.

Following the success of “Spy Kids 4D,” a film that baffled physicists by taking on the little known dimension of smell, Dimension Films has begun production on another sequel.

“Harry Potter” was not the only long-running film series to bring in crowds this summer. Like “Harry Potter,” “Spy Kids” films have matured with its growing audience. The same children who watched the original can now pay $30 a ticket to bring their own children to another film perfectly catered to their short attention spans. Producer Elizabeth Avellan says that there is something for everyone in this sequel. “The kids will love the talking dog, and the parents can get really high and giggle at the loud fart jokes.”

The movie has earned less than half of its $27 million budget, but director Robert Rodriguez has hardly been discouraged by this fact. Dimension Films announced earlier today the plans to film another installment to the franchise, which will further challenge the boundaries of the movie industry. In a recent interview, Rodriguez described 5D as utilizing a new technology in which paid attendants will reenact the sensations the characters feel in the film. “You’ll experience the cool breezes, the reassuring hugs, and what it’s like to be punched in the face, all for a mere $29.95.”

Despite almost universal critical panning, audiences have shown appreciation for “Spy Kids’” simplicity amongst more serious and thematic films like “The Help.” Contributing to this sense of straightforwardness is the fact that “Spy Kids” has put their target audience directly in the title, a strategy that has been used successfully by “The Good, the Bad and the Ugly,” “Psycho,” and “Friends with Benefits.”

The actor’s performances in this film have been the subject of much debate. One audience member noted that “kids usually have vivid imaginations, but I couldn’t believe that the two child stars were anywhere other than in front of a green screen talking to a tennis ball on a stick.” On the other hand, in spite of the film’s lighthearted atmosphere, critics have recognized Jessica Alba’s standout dramatic performance. “Despite her relatively successful career, Alba manages to convince the audience that she is a C-list actress from the SyFy channel,” critic Roger Ebert said. “The desperation in her performance is quite poignant.”

Many critics have described 5D as being overly ambitious and wonder what Rodriguez will do if there are more sequels than there are human senses. However, Rodriguez was confident that his creative team could “come up with some kind of psychedelic synesthesia experience.